Images of the world of Albert Kahn 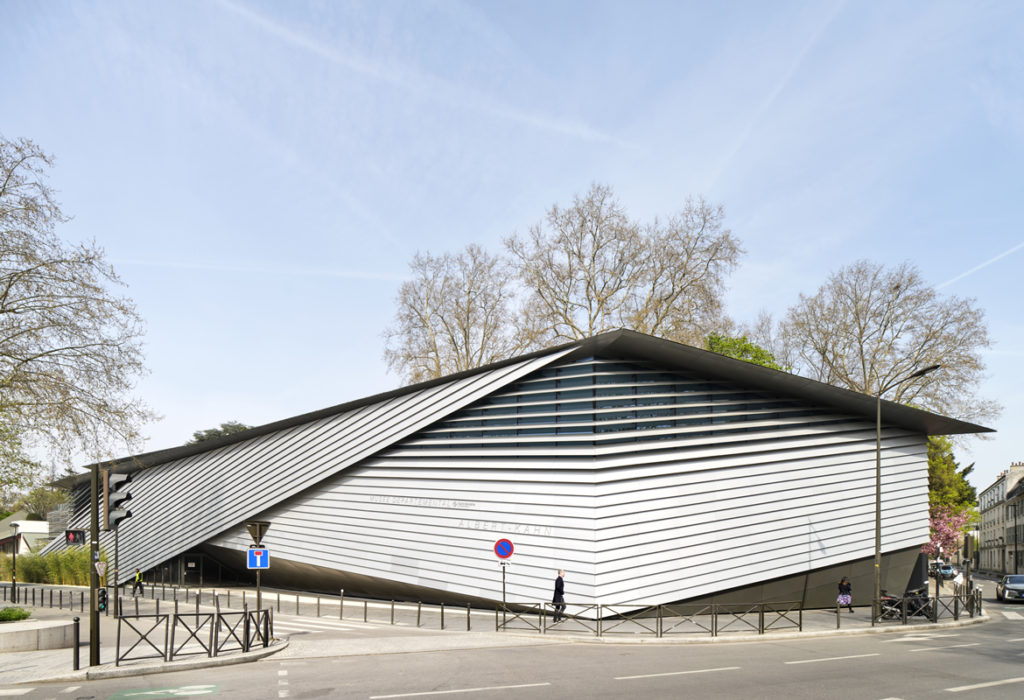 It will have taken ten years for the Albert-Kahn museum to be reborn, its gardens and its heritage buildings renovated and increased by the 2300 m² of the new building designed by the Japanese architect Kengo Kuma. In Boulogne-Billancourt, where Albert Kahn (1860-1940), philanthropic banker and traveler, had established his residence, now stands a center dedicated to images and plants.

A new museum around a restored garden

The design of the new building was entrusted in 2012 to the agency Kengo Kuma & Associates following a competition. Keeping in mind the ties that united Albert Kahn to Japan, the agency proposed to work on the Japanese notion ofengawa, a space of transition between interior and exterior. From the street, we actually cross several spaces, like so many protective skins, which direct us towards the garden, taking us from public to private, from the city to nature. The building acts as a protective screen around the garden, its skin of metal blades on the street side giving way to a reinterpretation of the weldingwindow screen made of wood or bamboo slats, here scaled to the facade, with a mix of wood and metal slats on the garden side.

From inside the museum, our gaze naturally turns to the garden, which extends over four hectares, between French garden, English garden, Japanese village and contemporary Japanese garden, orchard – rose garden, golden forest, blue forest and Vosges forest. In this heritage garden, you can indulge in a meditative as well as a botanical stroll. But the new spaces dedicated to the presentation of the permanent collection take us even further, in the footsteps of early 20th century travelers who traveled the world.

After having himself traveled for his work and brought back numerous shots, Albert Kahn founded the Autour du Monde scholarships in 1898, which allowed young associates to complete their education by fifteen months of travel. He wanted to record the world using these new processes, which made it possible to capture still or moving images, thus creating the Archives of the Planet in 1909. This collection brought together some 72,000 autochromes, 4,000 black and white stereoscopies and a hundred hours of films on fifty countries.

On the ground floor, we can admire 2670 reproductions of these autochromes (the originals being far too fragile) on a backlit glass plate. And these color images with their particular grain of a world today transformed or disappeared create a striking impression of a diminishing distance between it and us. The accumulation of images makes us travel between a Japanese temple by the sea, a young Asian woman with a traditional headdress, the mountains of Italy or a convoy from Central Asia, in a wonder that will make your head spin. These images are compared with several devices to understand Albert Kahn, his centers of interest, his friends and his multiple projects.

By making all the images in the collection available to everyone on its site, the Albert-Kahn museum is following in the footsteps of the founder of its collection, educating through images and sharing knowledge. Like him, we use current technologies to share the past and stimulate reflection, beyond the exotic images. These images and the garden’s plant collections can be the starting point for questioning and research in many fields such as sociology, geography, history or even ecology, showing the multiplicity of possible readings of a image, however objective it may be.

Pictures from yesterday and today

Upstairs, a new temporary exhibition space will allow exploration of the collections through thematic axes linking the challenges of yesterday and today. The first exhibition takes as its starting point the journey of Albert Kahn around the world in 1908-1909, founder of the Archives of the Planet. Accompanied by his authorized representative Maurice Lévy and his driver-mechanic-photographer Albert Dutertre, he left for Japan via the United States and then returned via China, Malaysia, Sri Lanka, the Suez Canal and the Mediterranean. , suitcases full of stereoscopic plates and film strips.

Around this central core develops a reflection on the construction of the image of travel from yesterday to today. With a certain nostalgia for the pre-pandemic era when we could visit the world, we compare images from the beginning and end of the 20th century, up to current space explorations. Between landscapes, monuments, means of transport and selfie, the motifs are found between photographers and artists, each sharing a piece of their vision of the world. If nowadays, with the development of the Internet and mass tourism, the distances between the world and us have been considerably reduced and it would be almost possible to visit everything from your living room, the exhibition highlights the importance of come face to face with reality. Get lost, find yourself and apprehend the world with all your senses.

The Albert-Kahn museum has succeeded in its bet with this reopening which transports us to the four corners of the world while remaining in a cocoon outside the city and time. The perfect motionless journey.

Around the world. The crossing of images, from Albert Kahn to Curiosity
From April 02 to November 13, 2022
Albert-Kahn Departmental Museum – Boulogne